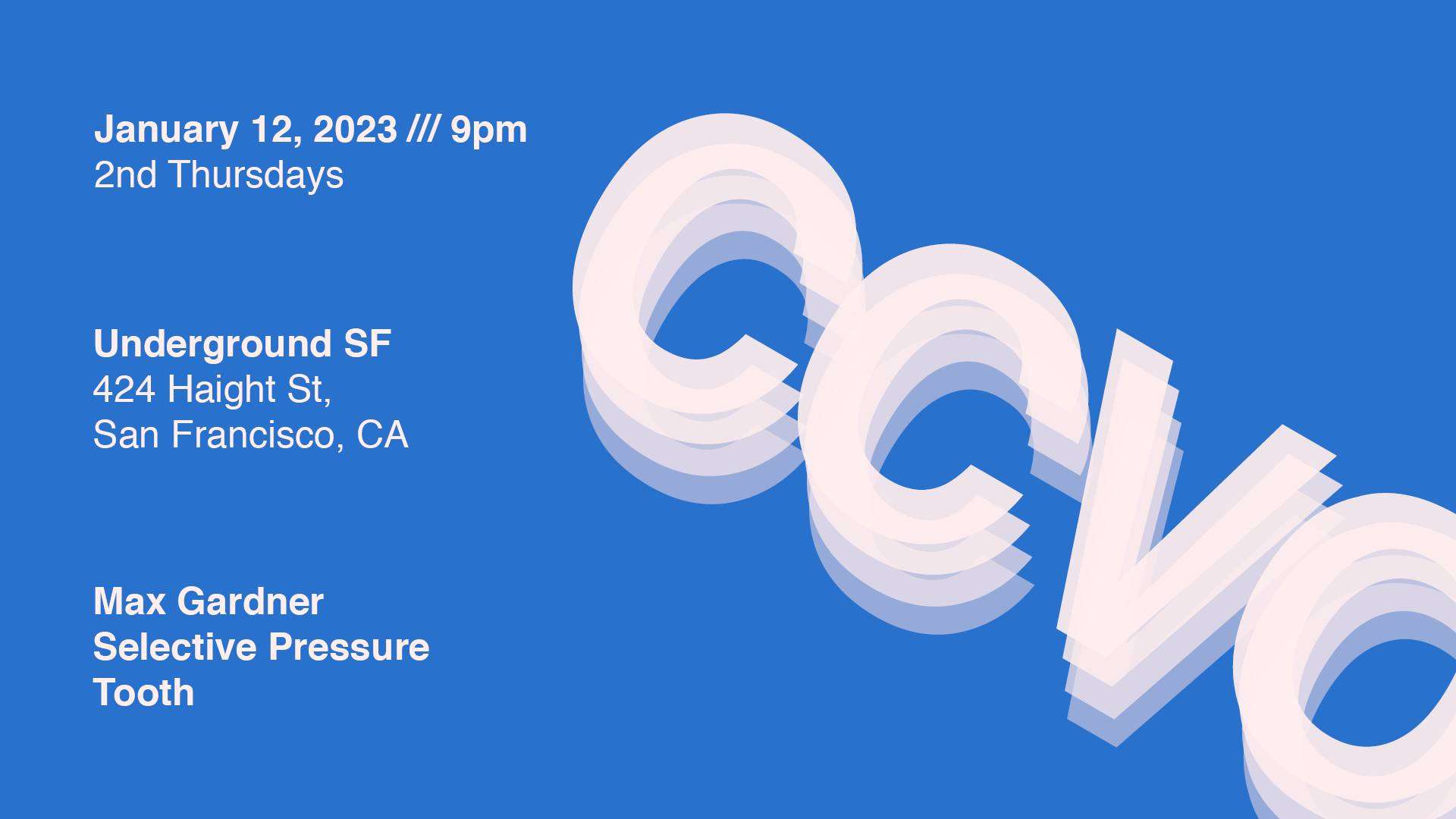 CCVO is back with 2nd Thursdays at Underground SF.
Here are the selectors for January …
Max Gardner
—
https://soundcloud.com/max-gardner
https://www.instagram.com/maxgardnermusic/
Techno is a layered phenomenon. On the surface level is the talk,
fleeting and temporary. Beneath it lies an intricate web woven by all
manner of creatives and intellectuals. At the center of it all is the sound itself, and it is in this realm of sonic abstraction that you find Max Gardner.
The San Francisco DJ and producer did not initially pursue electronic
music with ambitions to promote himself as a brand. Doors opened
nonetheless, and they never stopped. He is now one of the artists most closely associated with Bay Area techno, releasing on labels like Occultists, Resource Records and Northern Parallels.
His often psychedelic, sometimes suspenseful, always hypnotic range of the techno spectrum has afforded him audiences in cities across the globe. He’s performed at clubs like MUTE in Medellin, Leland City Club and The Works in Detroit, Beta Nightclub in Denver, and Desterro in Lisbon. He is also a return guest at gatherings like
DEPTH in Seattle and The Great Beyond outside Minneapolis.
Max Gardner lives for the ephemeral moments in which time stands still, where words fail, as pure and honest audio shakes every reveler to their core. To see him behind the decks is to understand that he belongs here. He knows this world intimately. His place in it is permanent.
Selective Pressure
—
https://www.instagram.com/_pteron_/
https://www.instagram.com/tips.tk_/
Tooth
—
https://ra.co/dj/tooth
https://www.instagram.com/mikebuttertooth/
RA Link: https://ra.co/events/1636607

Manage Cookie Consent
To provide the best experiences, we use technologies like cookies to store and/or access device information. Consenting to these technologies will allow us to process data such as browsing behavior or unique IDs on this site. Not consenting or withdrawing consent, may adversely affect certain features and functions.
Manage options Manage services Manage vendors Read more about these purposes
View preferences
{title} {title} {title}